Patriots Mailbag: An Early Look at the Pats First-Round Options in the Draft and a Free Agency Wish List

Jonathan Jones in for busy offseason between free agency, fixing a dam and learning to fly

Troy Brown 1/29: "I don't think I could get this experience any other place"

The Patriots cleared up any speculation about the playing status of Tedy Bruschi yesterday when a statement was issued that Bruschi will not play this season.

The Patriots cleared up any speculation about the playing status of Tedy Bruschi yesterday when a statement was issued that Bruschi will not play this season. Patriots executive director of media relations, Stacey James issued the following statement Wednesday: "Since suffering a mild stroke on February 16, 2005, Tedy Bruschi has focused on the short-term goal of getting better every day. His health has improved steadily during the past five months and Tedy continues to make daily improvements with his on-going rehabilitation. It has been an offseason of many emotional highs and lows for Tedy and his family. With the Patriots' training camp reporting date now just over a week away, Tedy has reached a decision on his playing status for the upcoming season and has declared his intentions to forgo the 2005 campaign. The Bruschi family wanted to express their heartfelt appreciation for the tremendous outpouring of support they have received from fans throughout New England and others around the country. They also expressed their gratitude for the support and assistance provided by the entire Patriots organization. Tedy pledges to focus on his health and his family while continuing to offer on-going support to his teammates throughout the upcoming season."

Jerome Solomon of the Boston Globe, Michael Felger of the Boston Herald, Tom Curran of the Providence Journal and Chris Kennedy of the Republican all offer stories on Bruschi's decision not to play the 2005 season.

Michael Felger of the Boston Herald offers players reactions to the teams announcement on Bruschi's playing status. "I think there are a lot of things in life a lot more important than football, so I do think this is good news. I don't think there's any reason to rush it. He's still a Patriot," said Ted Johnson.

Chris Colston of Sports Weekly offers up his NFL predications on USA Today. He predicts New England and Miami as the top two in the AFC East. 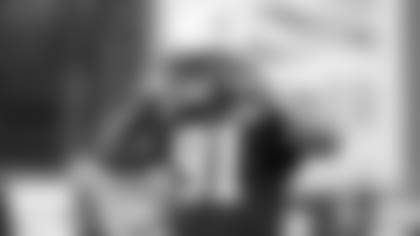 We're breaking down the top segments from Tuesday's edition of the PFW in Progress radio show so you don't miss a thing.

News and notes from Patriots practice and locker room interviews.

Patriots Today's Jackie Brittain will answer your questions regarding the 2015 Patriots.

The New England Patriots Cheerleaders will be making promo appearances at the following locations:

Patriots.com has collected what the top 'experts' are predicting the Patriots will do in the first round come draft weekend. We will be updating this feature regularly to reflect changes in any of the mocks represented.

Patriots Mailbag: An Early Look at the Pats First-Round Options in the Draft and a Free Agency Wish List

Patriots linebacker Matthew Judon was mic'd up during practices for the Pro Bowl games.

Troy Brown reflects on the news of Tom Brady retiring, and looks back at his storied football career.

Watch as Patriots coaches Ross Douglas and Mike Pellegrino were mic'd up at the East-West Shrine Bowl practices in Las Vegas.

In Case You Missed It

The National Football League (NFL) today announced there will be two 2023 International Games in Germany next season. The Kansas City Chiefs and the New England Patriots will make their debuts in Germany as designated teams, following the inaugural international game in Munich in 2022.

With the conclusion of their 2022 season, the Patriots 2023 slate of opponents has been set.

A Guide to Modern Football Analytics for Beginners

Ever get confused about the new stat in an article you read? Here's an explanation of what the metrics mean.

New construction beginning in 2022 will create the largest video board for an outdoor stadium, new hospitality and function spaces and a completely reimagined north entrance to the stadium by 2023.

A calendar of important upcoming dates for the NFL and the New England Patriots in 2023.

Advertising
The browser you are using is no longer supported on this site. It is highly recommended that you use the latest versions of a supported browser in order to receive an optimal viewing experience. The following browsers are supported: Chrome, Edge (v80 and later), Firefox and Safari.